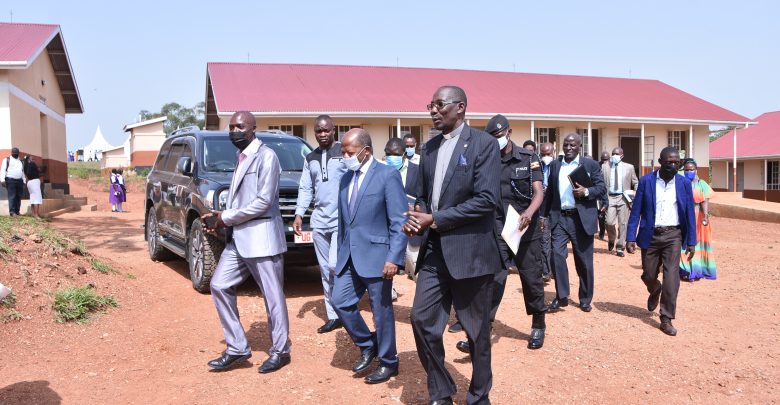 The Education Ministry has set a target of 77,700 learners of which 51% will be female in the Seed Secondary Schools under the Uganda Intergovernmental Fiscal Transfers (UgIFT) Program. The Ministry conducted a comprehensive mapping exercise in 2015 which revealed that 385 sub-counties did not have secondary schools.

The UgIFT program, which has seen the government build 117 Seed Secondary Schools, is covering only 259 of these sub-counties.

“since each school has been constructed to have 6 classrooms each estimated to accommodate at least 50 students per class, this is increasing access by 300 learners per school.”

She added: “By the end of the first phase, the Programme estimates that access will be provided to 35,100 students and by the end of the programme, 77,700 learners will have access to Education and the Ministry projects that at least 51% shall be female. This will therefore go a long way in not only improving the Education outcomes but also bridge the gender gap even further.”

Since the mapping exercise of 2015, however, a number of administrative units have come into existence.

Lamaro said a new mapping exercise shall be required to establish the number of sub-counties without seed schools.

Over the disbursement period of five years, the Ministry is expected to receive Ushs. 3,636.5 bn from the program for the components of wage, non-wage and development/construction.

According to Lamaro, so far, the program has disbursed Ushs. 1,674bn to the Ministry for implementation of planned activities.

Lamaro’s speech was read at the launch of Nazigo Seed Secondary School in Kayunga District and Kimenyede Seed Secondary School in Mukono district. The facilities at the new schools being commissioned include a multipurpose hall, three units of classroom blocks, an administration block, a fully equipped two unit science block with science kits and chemical reagents, a library, an ICT block and a three unit teachers’ houses among others

“To further strengthen the inspection of schools and education institutions, the program is supporting the roll out of the Teachers Effectiveness and Learner Achievement (TeLA) System to all government Primary, secondary and decentralized tertiary institutions,” said Lamaro.

For the Development component, the Ministry is constructing, equipping and staffing 259 Seed Secondary Schools in 3 phases (117 in Phase I, 115 in Phase II and 27 in Phase III) over a period of 5 years.

The Ministry is also constructing and equipping 418 laboratories in existing secondary schools without functional laboratories and completing construction of incomplete structures in 21 Technical Schools and Polytechnics.

“As we implement the Inter-Governmental, Fiscal Transfers (UgIFT) program, the Ministry has observed the challenge of lack of critical amenities such as electricity and water in some Seed Schools being constructed and this is mostly in those located in hard-to-reach areas,” said Ms Museveni. The launches of the schools are being conducted with fanfare

“I, therefore, request that the Ministry of Finance, Planning and Economic Development which coordinates the implementation of the program to prioritize the provision of these critical services to the schools,” she added.

The facilities at the new schools being commissioned include a multipurpose hall, three units of classroom blocks, an administration block, a fully equipped two-unit science block with science kits and chemical reagents, a library, an ICT block, and a three-unit teachers’ house among others – which require a consistent electricity supply.

The launch of the Seed schools is also aimed at reducing the school drop-out rate in Uganda.

Statistics show that out of 10.9million children at the primary school level, only about two million join higher level of education while the rest don’t progress.

Most of the children drop out of school because education is sold as a commodity, a situation the Ministry intends to address.